Let’s talk trends in entertainment, and what they might mean for your career goals in 2023 working above the line in film and TV.

The theme coming into 2023: Surprising twists!

2022 was a weird year in the entertainment business that saw the Will Smith slap of Chris Rock at the Oscars, the killing of Batgirl by Warner-Discovery, the strange and getting stranger by the minute acquisition of Twitter by Elon Musk, the proliferation of Mastodon and other social accounts like HUSSLUP and HIVE capturing those abandoning Twitter, Avatar exceeding a billion dollars at the global box office, the powerful push of smaller film from A24 Everything, Everywhere All at Once, and the most celebrated trailer of the year on social media with Cocaine Bear. White Lotus is still a huge conversation starter, as was Glass Onion.

Seems like it doesn’t matter if you love it, what matters is people talk about it, which drives our #1 commodity: the attention economy.

Last year the streaming bubble burst when Wall St decided that growth no longer matters when ascribing value to streamers and Netflix’s stock took a massive dive. Now revenue is the metric not growth, so the AVOD model is once again a relevant strategy streamers are all embracing. 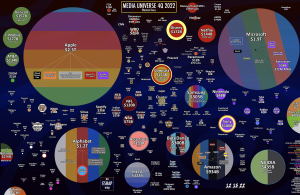 (Zoom in to see this Media Map created by Evan Shapiro, NYU)

Churn is the name of the game. Subscribers only grab a sub for the time it takes to watch a new show and then cancel, so platforms are more hip to this and dropping episodes every week just like old fashioned TV of my childhood.

Spec script sales are down in the market by 26% to last year. The leading management companies only sold 2 each. 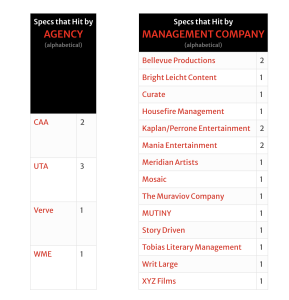 A lot of great TV was cancelled. Minx being dropped after getting a season 2 renewal stands out (no more #realdicks for us, sad). Henry Cavill getting told he will still be Superman, and then dropped also stands out. My therapist loves to remind me this industry is heartless. Sad fact. Especially true at Warner-Discovery last year. But they’re cutting costs, we’ll see if it’s worth the festering resentment creatives now feel toward them for such cruel moves. Will the HBO brand endure? TBD.

The attention economy is captured more by video games than TV and film (hi, Microsoft!), but there are fewer jobs there for above the line. Still, it’s worth keeping an eye on that growth and the job security games offers.

Mandates: What’s Hot and What’s Not?

Q4 of 2022 updates. I cover these in a lot more depth and share them with my students in the Entertainment Business School but here are some wave crests for you to see.

This is in no way meant to take the place of the actual studio/streamer/mini-major buying agendas, which the mandate lists cover in extensive detail. It’s my hope that the overview I provide below supports the understanding of what is trending in content for above-the-line creatives (especially writers), and what has shifted since last year. I look forward to seeing the Q1 mandates for 2023 to see what’s shifted as Minx was still listed, and we know it’s since been cancelled.

It looks like studios are more passionate than ever about reviving their existing IP, and wanting package and cast driven projects that are further along.

Except Apple which is skewing 30+

Drama mandates are in TV not features

Limited series, you need an A list actor attached for big streamers

Female driven is emphasized as is WOC for many buyers

Shows mentioned a lot: Yellowstone, Emily in Paris, Fleabag, What we do in the shadows, Killing Eve, Yellowjackets, Hacks

Expect there to be less money available for big budget fantasy and period unless there’s major IP attached and a big package.

Why it may happen: The WGA is renegotiating their deal with the streamers, which was made before anyone knew streaming would be a thing. With the rise of mini-rooms and no back end, writers are struggling. There needs to be no more free work, where multiple writers are crafting pitches for OWAs and losing out.

Why it could be good: Writers strikes may mean buyers shore up on content, and order more shows.

Why it could be bad: No work for guild writers, and above the line creatives who need income.

What does this mean for you and your career?

With a possible recession looming, more established reps are concerned with getting work for their existing clients, not taking on new clients. However less established reps with smaller desks at bigger management companies, or smaller shingles, are still looking for talent- especially with knock-out script samples or killer reels.

So if you’re not yet repped, focus on your killer sample or reel, and target lateral networking and also cold queries – especially if you have something stand out in your background, like you were a Navy SEAL who now wants to write network procedurals.

Great scripts still can cut through the noise. I compare this to winning Olympic Gold, or a Nobel Prize. Is it possible? Yes. Is it hard? Harder than ever. Not everyone agrees with me, but the numbers are clear. The competition is fiercer than ever. In the 1990s, there were less than 10 films schools in the US. Now every university offers a film degree. There are 50,000 grads/year coming out with film degrees. This is an industry that can’t support them all. So you have to be very strategic in your approach.

If you’re repped, remember to tee up your beginning of year strategy session with your team. You have to be the driver for your team. Inspire them. Remind them you’re worth fighting for.

Taking out material – shop around. The buyers all want something different. You’ve got to check their box.

Staffing – is harder than ever, make sure you’re reaching out to showrunners and EPs on your own in addition to relying on reps. Lean into your personal experience and how it will be of value to the show. It really helps if you already have credits to staff.

Directors, if you’re not working yet look to the fellowships – all networks offer them. It’s been hard going for women directors in TV. There’s more women directors than ever, and the breakthroughs are tough to come by. But remember that the DGA is required by federal law not to favor men, there are mandates to hire women. Query reps looking for diverse voices and female voices. Intersectionality for new directors. Remember that commercials are the bread and butter for most directors so don’t expect to earn a sustained living outside advertising and TV.

Actors, work on forging relationships with casting directors. Be memorable and friendly and make sure they know you and can remember you for other work if you don’t land this part.

Check out my podcast Entertainment Business Wisdom everywhere you get your podcasts.

The Tracking Board, The Business with Kim Masters, The Hollywood Reporter, Professor Evan Shapiro at NYU, and industry insiders.

How to Build Relationships in Hollywood - The Right Way (Video 3 of 3)   If you think I'm implying there's a wrong way to go about trying to build relationships, you're correct. In fact, the #1 mistake I see above-the-line creatives make

Why you need I.P. and How to Get It Spec script sales are pretty much non-existent in the market right now. So if you want to push your career as an above-the-line creative forward in 2023, you really want to pay

If you're a writer or director, and you don't have a manager yet, this video is for you. Why? Because you don't need representation to attach a producer to your movie. (Which is good news for un-repped writer/directors as it means you